Data dependencies are inherent in the notion of an algorithm. Data dependency algebras (DDAs) [BH09] turn dependencies into explicit, programmable entities, that are more fundamental than general dependency analysis of, e.g., loops in an imperative program. DDAs abstract how parts of a computation depend on data supplied by other parts at a fine-grained level. 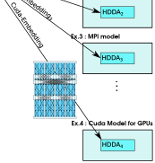 In a DDA-enabled compiler each hardware system is associated with a computational mechanism based on its Space-Time DDA. The generated code has precise placement of the computation steps as defined by the embedding. We are developing the Magnolia language to support DDA-based programming.

Portability: In the figure, DDA + Expression is hardware independent. Embeddings onto various hardware is defined from the DDA, and is thus reusable when the DDA is reused.

Reusability: The Butterfly pattern, used as an example here, appears in many divide & conquer algorithms, sorting networks and signal processing problems. The same DDA and embeddings can be reused for many computations, only the expressions differ.

Our current DDA project is a continuation of a previous project, where the simple DDA-based language Sapphire was developed. Some more examples are available on the old project pages.